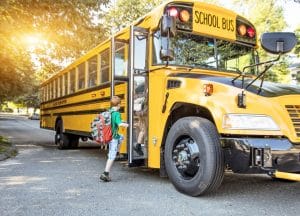 Even with remote learning in full effect, school buses are beginning to return back on the roadways. While school buses are one of the safest modes of transportation to get children to school, they still get into traffic accidents. In fact, there was a school bus crash in Putnam County not long ago, where someone suffered an injury. The National Highway Traffic Safety Administration (NHTSA) reports that on average, four to six children die annually in school bus accidents, while many more children are injured. Per the National Safety Council, in 2019:

Three of those deaths occurred in Oklahoma, and one of the victims was a 12-year-old girl.

What are some of the common causes of school bus accidents?

One of the most common causes of school bus accidents is driver negligence. Like all drivers, school bus drivers have a responsibility to operate the bus in a safe manner. Unfortunately, they can be as guilty of engaging in dangerous driving behaviors as anyone else.

Some school bus drivers text while driving, fall asleep behind the wheel, and even drive while intoxicated. When school bus drivers engage in these types of dangerous behaviors, they increase the chances of becoming involved in a serious traffic accident and seriously hurting the children.

Another common cause of school bus accidents is poor bus maintenance. School districts are responsible for maintaining the upkeep of all school buses. When school buses that contain defective tires and other parts are placed on the road, the school buses are in danger of breaking down in the middle of the roadways, leading to a traffic accident. It is also possible for school buses to break down from defective parts manufactured by the bus company.

What are the most likely types of school bus accidents?

One of the deadliest types of school bus accidents is a rollover accident. Rollover accidents happen when a vehicle tips over onto the side or the roof. These types of accidents have high fatality rates and can cause serious and fatal injuries for any children to present on the school bus during the accident. Rollovers can be caused by road defects, bad weather, or hitting a curb or median (usually depending on speed)

Other types of school bus accidents include:

Who is liable for my child’s injuries in a Tulsa school bus accident?

When children are hurt on a school bus, there are several parties that can be held liable:

It is important for parents to remember that schools have a particular type of immunity. This immunity – known as sovereign immunity – is a legal principle that protects government entities such as schools from being sued without consent. However, there are ways to hold a school district liable for any school bus accidents. You should give our Tulsa bus accident attorneys a call to discuss the plan to move forward as soon as possible, because the statute of limitations is different when you make a claim against a government entity, and there are specific rules about filing lawsuits.

At Biby Law Firm, we are parents, too. We take childhood injury cases personally. We’re dedicated to holding everyone who caused your child harm accountable for your child’s pain and suffering and his or her medical care. We understand the unique challenges that are involved when children are victims. To discuss your child’s legal rights with an experienced Tulsa childhood injury lawyer, please call us at 918-574-8458, or fill out our contact form. We handle personal injury cases on a contingency fee basis.