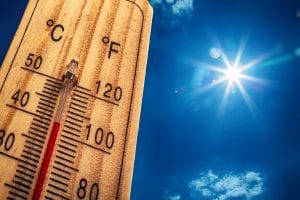 Recently, data was collected to determine the heavy human and financial toll that heatwaves have caused over the course of forty years. Not surprisingly, two heatwaves that occurred in Oklahoma happened to make the list. The first heatwave occurred in the summer of 1998, and the second between spring and Summer of 2011.

And this year, the entire country experienced heat and droughts like nothing we’ve ever seen. The increase in wildfires, plus an influx of floating smoke and ash, affected the entire country. If things remain the same, Oklahoma can expect some serious heat-related damage and illnesses in the future, too.

What are the dangers of heatwaves?

No matter where the heatwaves that took place in Oklahoma fell on the list, all heatwaves have one thing in common: the increasing temperatures combined with the intense heat make life unbearable in the summertime. A heatwave is a period of high heat and humidity with temperatures around 90 degrees and up taking place for up to two days.

Also known as extreme heat, heatwaves make activities outside during the summertime difficult. When people are outside during periods of extreme heat, the body has to work twice as hard to maintain a normal temperature. If this is not possible, people can fall victim to heat-related illnesses and even death.

What are heat-related illnesses?

One of the most serious heat-related illnesses is heatstroke. When a person experiences a heat stroke, the body’s temperature rises rapidly while the sweating mechanism fails and the body is unable to cool down. Under a heat stroke, a person’s body temperature can increase to 106 degrees Fahrenheit or higher in a matter of ten to 15 minutes. Heatstroke can lead to death or permanent disability if emergency treatment is not administered.

What is heat exhaustion?

To combat heat exhaustion, workers can relocate to a cooler environment and have cool liquids to drink, drink frequent sips of cool water, cool down with cold compresses, or wash the head, face, and neck with cold water.

What are heat cramps?

Heat cramps are an illness that impacts workers who sweat frequently during strenuous activity. Sweating decreases the body’s salt and moisture levels. Painful cramps are created when a person possesses low salt levels in their body. Some symptoms of heat cramps include muscle cramps, pain, or spasms in the abdomen, arms, or legs. To combat heat cramps, individuals should drink water and eat a snack, avoid salt tablets, and seek out medical help if the worker has a history of heart problems, is on a low sodium diet.

What is a heat rash?

A heat rash is a skin irritation that is caused by excessive sweating during hot and humid weather. Some symptoms of a heat rash include rashes that look like a red cluster of pimples and small blisters and rashes that are located on the neck, upper chest, groin, or in elbow creases. To help combat heat rashes, individuals can use ointments and creams that should not be used, apply powder to the rashes to help increase comfort, and keep the rash area dry.

How to stay safe from extreme heat while working outdoors

Individuals such as older adults, young children, people with chronic medical conditions, and outside workers are the individuals who are most at risk of suffering from a heat-related illness. For workers who want to remain safe from extreme heat but continue to work outside, there are some recommendations that workers can follow. One of the main recommendations was to prevent heat illness using acclimatization. Acclimatization is the physiological adaptations that happen during repeated exposure to a hot environment. To help acclimatize workers, management can gradually increase the exposure time that workers are performing in hot environmental conditions over a certain period of time.

Workers can also drink plenty of water anytime. They do not have to wait until they feel thirsty to drink water. Individuals may also want to refrain from drinking certain beverages such as alcohol or drinks that contain large amounts of sugar. Individuals should also wear and reapply sunscreen, and if possible, request that tasks can be completed either earlier or later in the day to avoid working in the heat. If possible, request to spend time in air-conditioned buildings during breaks or after work.

Individuals should also encourage those around them to take breaks and hydrate as much as possible. Although some occupations enforce a strict dress code, individuals should wear a brimmed hat and loose, lightweight, and light-colored clothing.

Did you suffer the loss of a loved one because they were forced to remain outside of their nursing home in the extreme heat? Did your loved one suffer a heat-related illness while at work? If so, the team of Tulsa wrongful death attorneys at Biby Law Firm can help. Call our office at 918-574-8458 or complete a contact form today. We proudly serve all Oklahoma communities but especially focus on Tulsa, Broken Arrow, Bixby, Claremore, Vinita, Grove, Afton Jenks, Sand Springs, Sapulpa, Wagoner, Muskogee, and the surrounding areas.