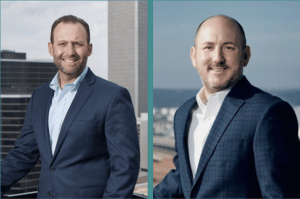 Biby Law Firm is excited to announce that Jacob Biby has been recognized by Oklahoma Super Lawyers, and Patrick Collogan has been recognized by Rising Stars, for work in Personal Injury: Plaintiff. This is Jacob’s 10th consecutive year being named to Super Lawyers, and Patrick’s 6th consecutive year being named to Rising Stars.

Super Lawyers is an objective ratings service that identifies “outstanding lawyers who have attained a high-degree of peer recognition and professional achievement” throughout the country, and in various practice areas. Only the 5% of all eligible attorneys will be selected for the annual list. Rising Stars recognizes attorneys who are under the age of 40 or who have been in practice for up to 10 years. Only 2.5% of all eligible attorneys will be named to Rising Stars.

Inclusion on either list one year does not guarantee inclusion the next. You cannot purchase a spot on the list, either. Instead, Super Lawyers reviews all nominations (self-nomination is not allowed) and evaluates each applicant based on a weighted, proprietary list of 12 different factors. From there, attorneys with the greatest number of points are reviewed by their Blue Ribbon panel members, who conduct an additional round of research and evaluation.

About our award-winning attorneys

Jacob Biby started Biby Law Firm so he could practice law the way he thought would best serve his clients: with attention to detail, and customized strategies. He has been recognized by Super Lawyers since 2013 (in 2012, he was named to Rising Stars). He has also been recognized by The National Trial Lawyers: Top 100 Trial Lawyers and Top 40 Under 40, and is a member of the Multi Million Dollar Advocates Forum. Jacob is licensed to practice in all Oklahoma state and federal courts, and is a proud supporter of Lawyers Fighting Hunger.

Patrick Collogan joined Biby Law Firm in 2021 as a partner, and immediately got to work fighting back against the insurance industry on behalf of his clients. He was first named to Super Lawyers Rising Stars in 2017. Patrick is licensed to practice in all state and federal courts in Oklahoma.

We are very proud of the work both Pat and Jacob do on behalf of the injured, and their commitment to helping clients find a new path forward. We hope you will join us in congratulating them on being named to the Super Lawyers and Rising Stars lists this year.