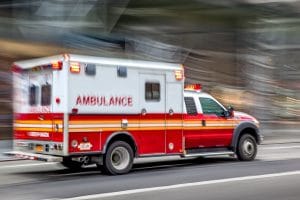 The family of a model was recently awarded $29.5 million in a case when a pretzel caused extensive brain damage. The award, by a jury in a Las Vegas Nevada court, was entered against a health care service that the jury deemed negligent because the company failed in its duty of care to properly treat her. The model, Chantel Giacalone, was 27 when the tragic event occurred. Ms. Giacaolone has a severe allergy to peanuts.

According to Health.com, the model was working a fashion trade show at the Mandalay Bay South Convention Center. A friend bought a yogurt for her. The yogurt had a “bite-sized peanut butter-infused pretzel on top, according to the Las Vegas Review-Journal.” The model took a bite and went into anaphylactic shock. She sought care with an onsite service called MedicWest Ambulance.

According to her lawyer, the model, while being transported by the company, “lost oxygen to her brain for several minutes.” The lawyer asserted that the medics for the company didn’t have IV epinephrine – “an adrenaline treatment for severe allergic reactions” – even though the law requires that they have that medication on-site.

Instead, the medics use intramuscular epinephrine. IV epinephrine is required when a patient goes into anaphylaxis shock. The failure to use the correct medication changed the model’s life forever. She is now “a quadriplegic and lives in her parents’ dining room.” She can only communicate with her eyes. She needs a feeding tube to survive.

The dangers of peanut allergies

According to the American College of Allergy, Asthma, and Immunology (ACAAI), peanut allergies are very common in children. About 25 in 1000 children have a peanut allergy. Peanut allergies can last a person’s full life.

The Mayo Clinic states that symptoms of peanut allergies include:

When the reaction to the peanut is severe, a victim can suffer anaphylaxis which is a severe and life-threatening allergic reaction. The symptoms of anaphylaxis include:

Normally, a person who develops anaphylaxis is injected with epinephrine (the drug form of the hormone adrenaline). The medication is injected into the person’s muscle. For most people with severe allergies, the injection is perfectly safe, and a true life saver.

According to Health.com, there are occasions where intramuscular epinephrine doesn’t work well. In those cases, intravenous (IV) epinephrine is used. According to an allergy specialist, “With an IV, you get more in and get it faster. Epinephrine is not absorbed as smoothly into the muscle as it would from an IV.” Using the IV form is common when a patient is admitted to an emergency room with anaphylaxis.

Why can an allergic reaction cause brain damage?

If a patient, according to the allergy specialist, isn’t treated correctly and in time, the patient won’t get the oxygen the brain needs – which can result in brain damage. While the need to treat with the IV form is rare, the possibility of oxygen deprivation is so great (and the consequences are so life-altering) that emergency medical service providers must have both types available to treat anaphylaxis.

The model’s father, according to Health.com, said that he was pleased that the jury award can be used to care for his daughter – but that he’s not pleased with “all the anguish that we’ve been through for the last eight years.” The parents will use the money “to invest in her future care and a new home that fits her needs better—specifically, a special shower and her own room.” The Las Vegas Review-Journal also states that the family will help a foundation help people who are coping with similar types of brain injuries.

What are the requirements for an injury claim?

The jury in the case of the model who wasn’t treated properly for her peanut allergy likely based its award on the medical malpractice of the emergency health provider. However, almost all injury claims require the same four elements of proof in order to move forward:

In the case of the model, it’s likely that the duty of care was shown through the arranged presence of the emergency provider at the Convention Center. The breach of duty was the failure to provide the IV form of the medicine instead of the muscular form of the medicine. The injuries were the brain damage the model suffered and the complete change in her life due to the need for around-the-clock medical care, her confinement to her parents’ home, and all the attendant suffering due to her inability to live a normal life. The damages include the costs (both economic and non-economic) related to those losses.

At Biby Law Firm, our Tulsa traumatic brain injury lawyers understand how crushing a TBI is. We work with doctors experienced at writing medical reports and testifying about medical errors in the same field of practice as the health providers who treated you. We demand compensation for the lifetime of medical care that TBI patients need, the pain and suffering they endure, the loss of income due to the medical mistakes, and the loss of life’s pleasures that oxygen deprivation causes. If a loved one tragically dies, we file a wrongful death claim on behalf of the survivors. To speak with an aggressive Tulsa injury attorney, call us at 918.574.8458 or fill out our contact form to schedule an appointment.